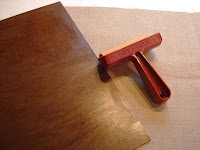 Prepared panel, linen, and brayer.
This week I have been building my own painting supports. I am working on two versions: linen on hardboard panel, and stretched linen (as well as cotton canvas) on wooden stretchers. The process is sort of like making cookies at Christmas - you get out a huge bowl, a dozen cookie sheets, and don't stop until they're all done.

I started with the panels I ordered from Ampersand. I followed the recommendation found on their website and coated both sides as well as the edges with GAC100. When that was dry, I was ready to mix the glue. I precut my linen, and followed the instructions on the package of rabbit skin glue from Utrecht. 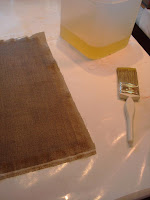 Here is the glue in an old Tupperware container, and my first attempt at attaching the linen to the panel.

It gradually became apparent that the glue was not holding. This may have been because I either mis-measured the granules and/or the water, or the water was too hot. I was following the instructions provided with the package, which were slightly different from instructions I've read from other sources.

So, I went back to Ampersand's instructions. They recommended attaching the linen using a slightly thinned acrylic gel medium. This worked well - except that I discovered I'd cut the linen too small if I wanted to fold over the edges. Back to the drawing board. 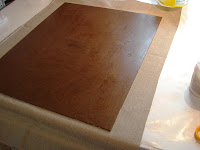 Here I am working on a larger panel. Plenty of overhang here. After smoothing out the linen using my Speedball brayer, I flipped the board and worked on the corners. 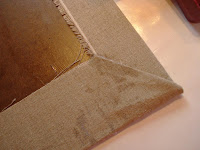 This took some careful folding, and after I finished I put the panel into a frame to make sure the corners would fit. Those that were too bulky were refolded. I decided to fold over the linen instead of cutting it flush to the edge because, for me, the corners are most prone to damage, loosening canvas, or breaking. 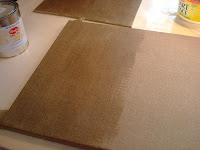 This is one of the stretched canvases with the rabbit skin glue on half of it.


After 24 hours, I lightly sanded the surfaces and got ready to the second application of glue.

I noticed that on one panel, the linen hadn't completely adhered, and I was a little concerned with the outcome. So I was particularly careful as I mixed the glue - in a smaller batch because I certainly hadn't needed the amount that I mixed on the first day. I cut the recipe in half and allowed the water to cool a little longer before adding the granules. That worked. After the second application of glue dried, everything was tight as a drum.

If you are stretching linen, staple it loosely to the stretchers. Do not fold in the corners yet, but staple close enough to keep the linen in place. Lightly spritz with water and wipe gently with a damp sponge. The linen will tighten up nicely. The glue makes it tighten further, which is why you don't want to start as tight as you think. It's the same for the cotton canvas, although the canvas- while wet - appeared to sag more than the linen, but again, when everything was dry, both the canvas and the linen are tight enough to work on.

Remember, leave the corners loose at this point. You will be putting on the oil ground next and want to coat everything before folding the corners. 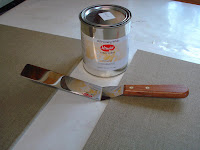 Today I applied the first layer of the oil painting ground from Utrecht. Here is the step-down knife I ordered. The idea is to apply a thin layer to fill in the spaces between the fibers. You can also use a brush for this - which I did eventually reach for when doing the edges. My eventual technique involved brushing on the mixture, then scraping it back with the step-down knife. 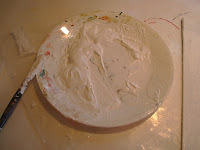 I mixed the painting ground with odorless mineral spirits according to the instructions. I used a glass plate, and after I finished, I was able to scrape the excess back into the can to use another day. 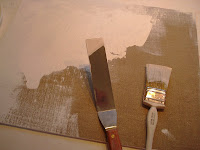 The tools. You can see the thinner areas - brushed on, the thicker areas, using the knife, sort of like frosting a cake but very, very thinly. 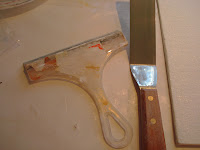 I also dug out a little squeegee that worked very well to scrape back the surface. The goal is to prevent any ridges from forming - from brush marks, or your spreading tools. From my research, the goal is two thin coats instead of one thick coat.

I will be adding the second coat within 48 hours, then letting the panels and canvases cure for 3 weeks.

I won't know until then how I like this painting surface, but I definitely enjoyed the process. I have always liked exploring the materials and processes used in creating art, from start to finish. It seems to connect me to the traditions that have existed through the centuries. No, I'm sure I won't give up my favorite oil primed canvases and panels, but if this is an affordable alternative, then I will continue to make my own.
Posted by Sue Smith at 3:25 PM

Wow, what a lot of work! Good for you!

Wow, thanks for that great lesson. 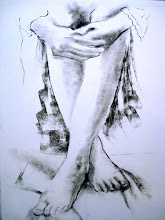 
You can contact me either by leaving a comment or email to sue@suesmithfineart.com.
See more of my art at Sue Smith Fine Art

I always love hearing from you.

Thank You for Visiting My Studio

Sue Smith
I love art, making it, talking about it, and arguing about it. I'm a painter - oil is my preferred medium. I started my art career at age 50 and in the past decade gained acceptance into major art organizations, received awards, sold directly to the public and through the gallery setting, learned more about the computer than I'd ever thought possible, learned how to become an extrovert (although I can only maintain that facade for two hours max) and in general, discovered I was capable of doing far more than I ever imagined. I write this blog about my work, and Ancient Artist, where I do most of my arguing and making trouble. I'm glad you stopped by.

Other places to find my art